Yes, Monsterbitchin' is a word.  It may not be in the dictionary, but it is a word. I say so, because it quite adequately describes the headache that I had all day.  Use in the sentence:  I had a monsterbitchin' headache.

My Day 2 began in the middle of the night.  At 3:30 am, I woke up feeling very sloshy.  I mean reflux sloshy.  I had still taken my bedtime routine supplements of Life 9 and Immupro.  And usually that's enough for me.  But in the middle of the night it was clear that it wasn't.  So I went and loaded up on Digize, applied topically along my esophagus and stomach, with a dab for good luck in my belly button.  Then I dropped one drop of Lemon on my tongue.   My stomach swirled for a while, so I went back to bed, doubling up on pillows.  I don't sleep well sitting up, I'm more of a tummy sleeper. I didn't think I'd fall back to sleep, but evidently I did.  Because the next thing I know, Chris was coming in to kiss me goodbye.  Normally, I'm downstairs saying farewell to him.

Once I was more coherant, I realized, I had a headache.  I went to my Oils, and tried M-Grain.  It didn't touch it.  :(  I went down to breakfast feeling rather miserable.  How was I going to do 5 days of this?  But I drank my first shake.  We've only been adding water and Ningxia to the Balance Complete, and drinking that. I had some tea yesterday and today.  And an Apple snack.  I had to tell the kids not to eat anymore apples, to save the rest for Eric and I.  Though Eric's not snacking.  He's a Beast.

While drinking, I started to think about Oils good for Detoxing.  I figured that this was the detox headache they had warned about.  I didn't get it on Day 1.  It came on fast and furious on Day 2.   So I tried Sacred Frankincense, yeah, breaking out the big guns.  That seemed to take the edge off.  So I used Frank a few times over the course of the day.  Steph suggested drinking water with Lemon, which was handy since I started with a Lemon tea.  Then followed up with Oil and Lemon.  It's Good Stuff.  Jacob had been so good, he didn't need a nap, but I was feeling so terribly, I was laying down on the couch.  He came up to me at 2:30 (our normal naptime) and asked if he could sleep with me.  OK.  He was too wiggly to sleep on the same side, but once he took the other side, and I let him borrow my Jedi snuggie, he fell asleep.  So did I.  When I woke, my headache was less.  I could still feel it, but it was not quite as bad.  I'm a Napper.  I'm sure, once fully detoxed, I won't NEED naps.  But I'll still want them.

I drank my entire jug's worth of water.  I wrote marks on it, so that I would drink half my body weight in ounces.  That's Math.   Let's just say it's almost a full gallon.  I rarely hit the mark.  But today I did! 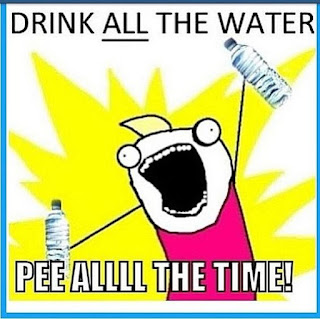 I kept opening the refrigerator to get food for Jacob or the boys, and seeing the giant jar of snacking dill pickles.  Now dill pickles are all I want in the world.

Or Pie.   I mentioned at the dinner table that I wanted pie, and it got us all singing the Pie song from Backyardigans, "Do you wanna make pie?"  No, I wanna EAT pie....  Only Jacob didn't remember it, so we had to pile into the living room and watch the Samurai Pie episode of Backyardigans.  Oddly enough, it helped distract me from my pie craving.

But I didn't eat any pie, or chocolate, or pickles.  Victory is Mine!
Posted by Cathy Willman at 10:59 PM