As we near the end of March, I noticed that my few pieces of aquamarine jewelry are looking pretty grimy.  Back in the day, when we lived in California, I worked in a jewelry store.  When I left I 'borrowed' a couple tubs of jewelry cleaner.  But it's been a long while since I used it all up, though it was also chock full of chemicals.  One thing I recall about cleaning jewelry from my days at the store, you don't want to use regular soap, because it will leave grime on your stones.  You might get the dirt out, but you'll likely leave behind a film that will detract from the sparkle and natural beauty of the stones.

So I decided to look up a recipe for using Essential Oils, a more natural cleaner to retain the natural beauty of my stones.   Here goes my experiment. 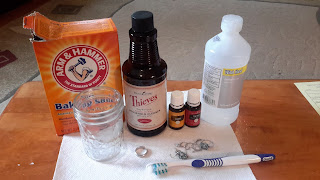 Mix in a glass jar, soak jewelry in for a minute or so, then remove, gently brush with toothbrush.  Do not scrub or use on pearls, opals, or turquoise.  Rinse clear with water and pat dry.

If you want to see my Video of using it and creating it, here you go:

Sorry I turned it sideways a quarter of the way through, I'm not a professional videographer.
Photos are more my thing. ;)

I've been hosting a Jamberry Party this week, and a few of my friends have asked how I take them off.   I incorporate using Young Living Essential Oils into the removal of my Jamberry Nail Wraps.

For some reason, I couldn't get the computer to switch directions while recording, so it recorded in two separate pieces.   I also couldn't get it to merge them together.  So here you go, 2 valuable chunks.

So for you here to review how I remove my Jamberry wraps with Essential Oils.

Enjoy!  Hope you are able to do some healthy removal, and enjoy combining these great products!
Posted by Cathy Willman at 7:28 PM No comments:

So I have this blend I use, I call it my Snoochie Blend.  It's 10 drops each of Melrose, Purification, and Lavender, and I use it around my ears and sinuses when I'm having congestion.  Last fall, I made a youtube video on what I do with my Snoochie Blend, it's not good, but here you go -

This week caught me off guard.  Jacob woke up Tuesday morning feverish.   Sam had gotten sick the week before, and it was Jacob's turn.  He woke up grumpy, and coughing more than usual.  I didn't like the look he had, so I took him into the Dr. in the afternoon.  He had a fever by naptime. And he had an ear infection.   I didn't see that coming!

So since then I've been trying to smother us all in the Snoochie Blend. But Chris got an ear infection by Thursday too, and apparently, a cough begun by some sort of viral crud can  lead to ear infections.  Oy.  So far, I've been applying to myself and haven't caught it.... yet.  Knock on wood.

Last night was a girl's night out for me, and I was so grateful for it, as I'd been home with sickies all week.  But one of my friend's ear was in need of some support, and she didn't have any Melrose.  So we Improvised:

This blend smelled so fabulous.  We put it in a roller, and added some grapeseed carrier oil.  And she applied it around the base of her ear and down to her throat, just like I did in my video.
Within probably half an hour she started to feel some differences, she wasn't sure if it was good things or not.  But this morning, she told me her ear was feeling tons better!  So I wanted to share this Improv Success Story!
Posted by Cathy Willman at 10:15 AM No comments: