Well, my day is ended and I didn't die. Frankly, I was amazed at my own willpower, I didn't drink any coffee, or any refined sugars.  I ate exactly what was on the menu.  And we had a good day. 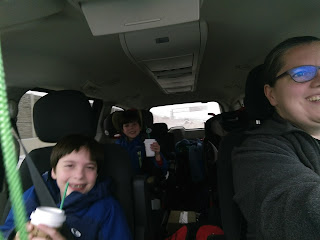 This rather impresses me, since I didn't eat much, and stayed on the diet. It was weird drinking breakfast, and not having a cup or two of coffee to drink while the boys ate.  It took extreme willpower to not eat the honey flakey biscuit egg sandwiches that I'd bought them for a treat for MLK breakfast.  But I did ok. I did just fine all day until waking from naps.  I actually was thinking I might not need a nap, since I was feeling good at lunchtime, but Jacob had started melting down, and the big boys needed Quiet Time.  So nap we did.   I didn't feel like anything was different until then.  Before that, it was just another day with the kids.  The big boys had the day off of school, so after Jacob went to school I packed them a lunch, we had the goal of going to the State Museum and the Eiteljorg. But it was snowing.  Snowing very hard.  The roads were nasty, so we made it to the Starbucks, and I decided to turn around.  Since we were defunct, I got them drinks before turning around.  I got myself an herbal tea.  I can still drink at Starbucks on this diet!  Woohoo!  And when I woke up, I was Hungry.  I needed Something.  When I got up from
naps, I grabbed an apple and refilled my tea.  It took the edge off, but I was definitely READY for dinner when it finally came around.  It didn't seem like enough, plus I'd forgotten to take my Allerzyme after dinner, so I did another shot of Ningxia. That seemed to do the trick.


Are you wondering what's in Ningxia Red? If the Ningxia Wolfberry has that much Antioxidant power, so does Ningxia Red.  We don't juice those berries, those magical berries are pureed.  So you have to shake before drinking ;)  We then blend in with some other juices for this potent superbeverage.  Research antioxidants and what they do, because it's Awesome!

Posted by Cathy Willman at 9:59 PM