This morning I went into the bathroom, and found an empty bottle of Raven on my sink.  Funny, I didn't use Raven yesterday, and no one has the cough coughs.  Well, Jacob was feeling iffy.

It turns out my husband made a new nasal rinse concoction this morning, I found the bottle on the edge of his sink. It was an old 5 mL RC bottle, but over the RC was a small label with  "The Nose Plays"  written on it.   It's got RC, Raven, Frank, Lavender, and Rosemary. He called it, "The Nose Plays". 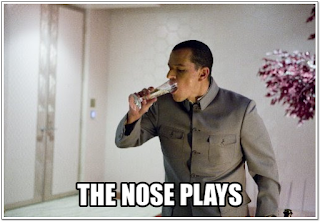 If you haven't seen Ocean's 11 (or 12, or 13) go watch them all.   In Ocean's 13 Matt Damon puts on a  gratuitous fake nose, and argues, The Nose Plays!   We didn't think it would but it did.  Just like we didn't think we'd find a happy blend of Oils to help rinse out Eric's sinuses.  But we did!  He has chronic sinus issues, and his doctor recommended a daily sinus rinse.  He uses a Neil Med squeeze bottle filled with water and a packet of salt so that it ends up being saline.  To this saline, he has been adding 1 drop of RC for his daily flush.  It's not a 'cure', but it has drastically improved his health baseline, thus making his other medications more effective since he doesn't have to use them as often.   He still has issues on occasion, so he's been mixing it up with other oils like Lavender or Rosemary,   but he misses the RC.  So he mixed up his own!  So I wanted to share it with you:

Mix in an empty 5 mL bottle. Then use 1 drop in Saline sinus rinse in a Neti-Pot or Neil Med Sinus Rinse bottle.   Hope the Nose Plays for you all too!

Email ThisBlogThis!Share to TwitterShare to FacebookShare to Pinterest
Labels: recipes