Have you tried Ningxia Red?   There are two 2 oz. packet samples in every Premium Starter Kit just to give you a try.  I confess, I didn't try mine at first.  I didn't try them until 5 months later, when I started to get a cold, and I was desperate for any immune support I had on hand.  I didn't really like the test, but I didn't get any sicker. 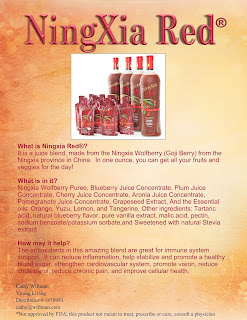 I started drinking 1 oz of Ningxia Red every day back in January, because my Diamond Leader (5 generations up from me) challenged us to a New Year's Challenge.  1 oz a day during the month of January.  Frankly, that sounded a lot easier to me than an entire year long New Year's Resolution.  So I declared that was going to be my New Year's Resolution, and Eric decided to join me cautiously.   So we drank.  And the first few weeks we shuddered when took that shot.   Ningxia Red is not a sweet juice.  It's a high anti-oxidant juice blend.   It's so packed with such great things, you only need an ounce or two.  And I didn't notice any big differences.
My husband Eric was very wary of our daily drinking of the Ningxia Red, that we took on for the January Challenge. The only changes we noticed were a. it tastes better to us than when we first started, and b. neither of us got sick. But as it just so happened, Eric had been working insane hours for a big project.  I hate to say it, but a 40 year old man cannot pull all-nighters like a 20 year old.   With all the hideous hours Eric's been keeping of late, it was pretty miraculous that he didn't get sick.  Traditionally, he does. When it was over, I had been asking and asking him if he wanted to continue.  All he said was "Well, it's a habit now." And he told me in the beginning of February that I better order some more, he didn't think we can make it to the end of February when my ER order comes through. I guess that's Man-Speak for I like it hon, your voodoo oil beverage works, let's get some more.
Then in March, Christopher had to take the ISTEP, a standardized test for all third graders.  So we decided to boost his health and brain power, to start giving him shots of Ningxia Red too.  He was a big fan.  He made this video with me for one of my facebook online classes.  He loves his "red juice".

Way to be Compliant!

He was pretty adorable, and he's been joining us in shots most everyday ever since.  Even Sam has gotten in on the action, we started spiking his green juice with red juice.  One morning, he noticed that we spiked his juice, and accused us, "Mommy!  Did you put red juice in my green juice?!"  Yes.  "Oh OK."  He was totally cool with that.  And now he asks for it.  We all do Family Shots in the morning.  Our Aunt Teri had a chronic cough for 10 years, the doctors didn't know what to do with her, and she finally was able to kick it using Thieves, LLP, and drinking Ningxia Red daily.  I went to the eye doctor this summer, and was thrilled to hear my astigmatism was gone and my prescription had improved.  I'd been using oils for a couple months when I had gone in last year, but this year, really the only change had been the addition of daily Ningxia.  They say it can support eye health, I thought they meant for someone with eye problems, I didn't think it would apply to me.  So it was a Bonus Health Boost!
When school started this year, kids and parents were dropping like flies.  But our immune systems were so well supported with our oils and our Ningxia, it was Amazing.    I got close last month, the closest I have been to getting sick since I started using Essential Oils.  I was a snotty mess, and had a gross cough.  But I never got a fever.  I stayed close to home because I sounded so gross, and napped every day, well, as long as Jake would let me.  I drank my Ningxia and used my oils and didn't get sick.  It doesn't sounds like a fancy testimony, "I drank Ningxia and didn't get sick." but if you knew us before Young Living, you would be amazed at the difference.  If you are looking to boost your immune system for the next few months, give Ningxia Red a try.  Just try it for a month.  See if you notice a difference.  Even if the difference is so simple as we didn't get sick, it might be worth it.

Posted by Cathy Willman at 7:47 PM